The Time Has Come to Leave Your Air Conditioned Home and CELEBRATE 4th of July!

Denver fireworks 2017: Guide to Fourth of July fun in the metro area

Did we mention most of them are free? 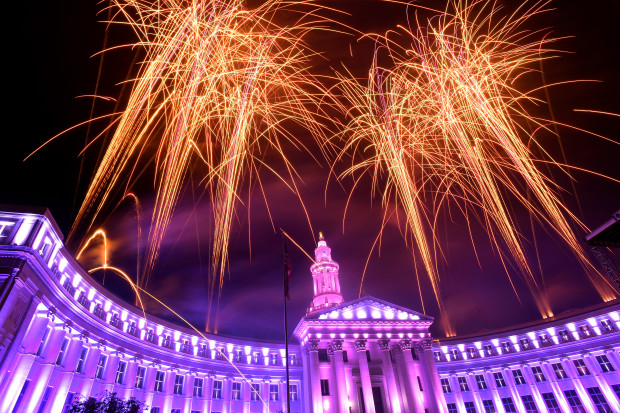 Outside of this official display, all fireworks are illegal within city limits, and fines can run up to $1,000 per infraction. Call 720-898-6919 to report non-emergency fireworks use.

AURORA
The Aurora Municipal Center’s Great Lawn will host the city’s “Fourth of July Spectacular,” a 6-10 p.m. event on July 4 featuring music, food and a fireworks display at 15151 E. Alameda Parkway. Visit auroragov.org for a list of the city’s best best fireworks viewings areas. Note: The new RTD R-Line is walking distance from the event site.

BRIGHTON
A concert and fireworks display will take over Carmichael Park, located just behind Brighton City Hall, 500 S. 4th Ave., with entertainment from DJ Tidalwave starting at 5 p.m., and headliner Erica Brown with The Movers & Shakers at 7 p.m. Events — including kid’s activities and a laser show — run 4-10 p.m. July 4, with fireworks around 9:45 p.m. brightonco.gov/817/4th-of-July.

Call the non-emergency dispatch line at 303-288-1535 to report illegal fireworks in Brighton, Northglenn and Adams County.

COMMERCE CITY
You don’t need to buy a ticket to the Colorado Rapids game July 4 to get a view of the 9:30 p.m. fireworks display at Dick’s Sporting Goods Park (which follows the game against the Seattle Sounders). They’re billed as the state’s largest and come as part of Commerce City’s 22nd annual 4th Fest, a free, family-friendly event (outside of Burgundy Boulevard) with karaoke, trampolines, disc golf, human hamster balls, live music, food and drink and other diversions. Game and main events at 6000 Victory Way. 5-9 p.m. coloradorapids.com.

DENVER
The annual Independence Eve celebration at Civic Center offers first-come, first-served lawn seating for its free concert (i.e. blankets and chairs) with Soul X and the 101st Army Band of the Colorado National Guard, a City and County Building light show and the 8 p.m. fireworks display July 3. civiccenterconservancy.org.On July 4 on the other side of downtown, Elitch Gardens will offer a dusk fireworks display visible from the surrounding areas, while the Denver Outlaws game at Mile High Stadium (against the Atlanta Blaze) will be followed by fireworks. denver.org.

JEFFERSON COUNTY
Can’t wait until July 4 and live in Jefferson County? Head to Littleton’s Red, White & You event from 5 to 10 p.m. July 3 at Clement Park (7306 W. Bowles Ave.). Food, adult beverages, exhibitor booths, the Wash Park Band and a 9:30 p.m. fireworks show round out the event. ifoothills.org/events. Also for JeffCo: Bandimere Speedway’s Jet Car Nationals & Family Festival on July 1, which costs $15-$58 (children 5 and under are free) with $10 parking, but which will be easy to view from almost anywhere in Morrison or along C-470. bandimere.com.

PARK HILL
While there may not be a proper fireworks display in Denver’s tree-lined Park Hill, there is a charming, Norman Rockwellesque parade. The eighth annual event, which begins at 1:30 p.m. on July 4, stretches from Dexter to Krameria Street on 23rd Avenue and ends with a 3 p.m. street fair on the 2200 block of Kearney Street featuring food, music and kids activities. parkhillparade.org.